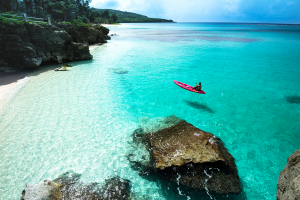 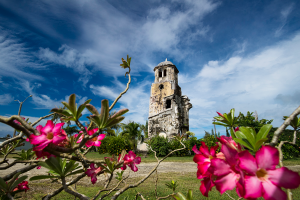 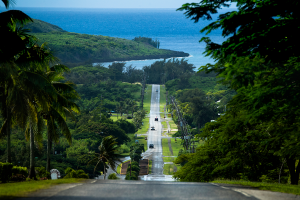 Home of the annual “Pika Festival”, Tinian, a neighboring island just three miles south of the main island of Saipan in The Marianas, is easily accessible through a short hop on a plane.  The crystal water, colorful marine life, and pristine coral reef surrounding the island offer excellent snorkeling, scuba diving, and fishing. Abandoned Shinto shrines, canons in caves, and ruins in the jungle are ready to tell their stories.

See pre-historic remains of ancient indigenous Chamorro culture, including the ruins of the House of Taga. World War II relics abound, including the Atomic Bomb Pits used to load the atomic bombs dropped on Hiroshima and Nagasaki. During WWII, Tinian had the busiest airport in the world, and today you can still drive those extensive runways that played a pivotal role in ending the deadliest war known to mankind.

Stretches of secluded beaches offer the perfect setting for a romantic getaway or perhaps a destination wedding with a breathtaking backdrop of Tinian’s pristine surroundings.